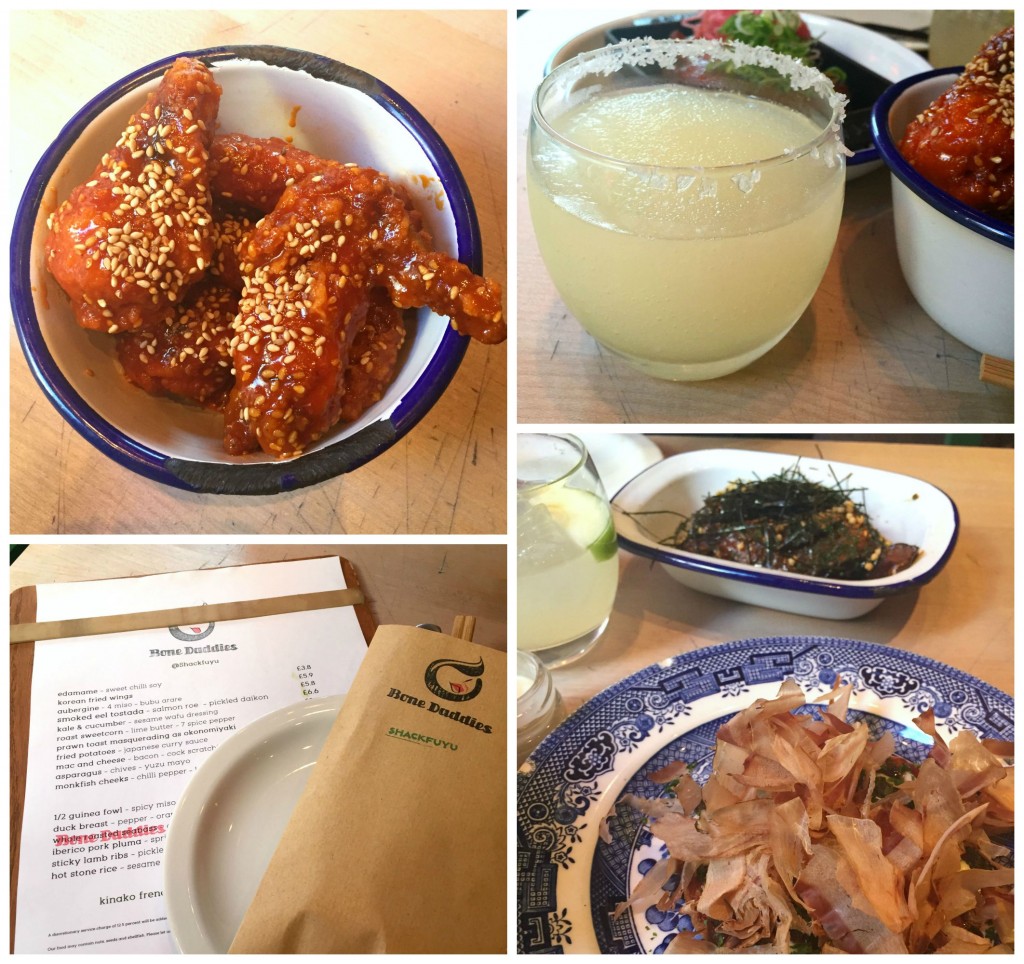 Shackfuyu has been on my must-eat list for a very long time! It comes from the guys behind Bone Daddies and Flesh & Buns – if you haven’t seen the french toast with matcha soft serve on your Instagram feed then I don’t know where you have been hiding!

I was meeting Katy from Little Miss Katy for the first time (we’d chatted lots online and thought it was about time we met in person!) and when I suggested Shackfuyu I was very happy she was as keen to go as me!

Shackfuyu is a 12 month Japanese fusion ‘pop-up’ on Old Compton Street – it serves Japanese flavours in global culinary styles. The pizza oven on site was left by the previous tenants Made in Italy and is used for much of the cooking.

It so happened that our date night also coincided with the wonderful tube strikes. We weren’t going to let that deter us, so I set off from my office in Bank after work and walked to Soho to meet Katy. A little hot from the walk we went straight to the cocktail list! Katy went for Ringo Star (gin) which came in a very cute little bottle for you to pour over ice. I ordered the frozen yuzu margarita with the salt rim, which was deliciously tangy.

The menu is compact and consists of small plates, meaning it is ideal for sharing. My favourite style of menu. It changes frequently but this is the low down on what we ordered…

Korean fried wings – I love a good Korean chicken wing, heck, I love any kind of chicken wing! But these were top of their game delicious. They were big and juicy (no one likes a scrawny wing) and covered in an incredibly moreish sauce which definitely gave a massive kick! The warmth just seemed to grow – I was thankful for my frozen margarita.

Prawn toast masquerading as okonomiyaki – I loved everything about this dish apart from one issue – the dried flaky fish on the top (Katy found out it’s dried fermented tuna). We weren’t sold. So this was scrapped off so we could enjoy the juicy prawns delcious sauce and crispy toast. An almost win in our camp.

Picanha Beef with Kimchee Butter Sauce – This was definitely my favourite dish of the night. You must try this if it’s on the menu when you go. That’s an order!! The rare beef is sliced and served in the most divine sauce. It’s rich and salty and you will actually want to drink it. Topped with pickles and spring onions, this dish is just incredible.

Aubergine marinated in miso and topped with crispy seaweed – It was sticky and sweet and went beautifully with the beef. I loved the contrast in texture between the soft aubergine and crunchy puffed rice. There are so many miso aubergine recipes out there and this dish really makes me want to have a go at home!

Kinako french toast with matcha soft serve – as mentioned before, if you have not seen this beauty on Intsagram or Twitter – where have you been! Grace Dent even called it ‘the greatest new pudding in London for 2015’. It is heavenly. It’s crispy on the outside and gooey in the middle. The rich, sweet french toast is the perfect partner for the matcha soft serve. Oh, to have this in front of me now…

We really enjoyed our meal here: I’d like to go back for the beef and french toast alone! There’s a nice laid back vibe here and the staff were friendly and helpful. Oh, and you can book! Such a rarity these days it seems. I would definitely recommend you go check Shackfuyu out. I’ll definitely be going back soon.

PS. I had to walk alll the way from Soho to London Bridge to get a train home. Luckily it was a beautiful summers evening, and basically means the meal was zero calorie, right!?